Men love to spout sexist stereotypes about women behind the wheel. "Dude, I saw this car doing crazy stuff on the 401 today, and I knew it was a chick. Sure enough, soon as I caught up to the car, who's in the driver's seat? Some broad." Well, get over yourselves gentlemen. The evidence is not on your side.

According to the New York City Pedestrian Safety Study and Action Plan released in 2010, 80% of crashes that kill or seriously injure pedestrians involve male drivers. Researchers further found that the difference is far too great to be explained away by the predominance of men among bus, livery, taxi and delivery drivers.

According to InsurEye, a service that helps make the insurance business transparent for consumers, women have fewer accidents than men, and their claim amounts are lower. As a result, women pay on average 3% less for auto insurance than men (at least in Ontario, with national figures nearly the same).

According to AAMI, an Australian Insurance provider, men are more likely to be involved in serious accidents, i.e. head-on collisions, roll-overs, loss-of-control crashes and collisions that involve pedestrians, animals and cyclists. (While it may amuse you men to know that women are more likely to hit stationary objects or reverse into other cars, no mother ever had to grieve about the loss of her mailbox.) Nearly twice as many men as women admit to speeding most of the time, and to ignoring posted speed limits. Nearly half of the men in their study had been over the legal limit for alcohol compared to a quarter of women, and men are more than twice as likely to think it's OK to drive after drinking, as long as they "feel" capable - correspondingly (and alarmingly), men are twice as likely as women to over-estimate how many drinks they can have in a given period and still stay under the legal limit. Men are also twice as likely to drive after using recreational drugs, and twice as likely to fall asleep at the wheel. (Coincidence? Hrm?). 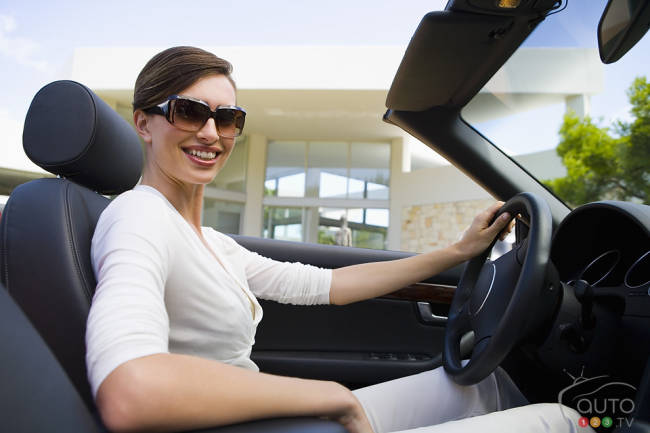 While the fact that men account for more than half of all miles logged (according to the IIHS, it's about 60% in the US), which indeed may give them better proficiency in addition to more chances to crash, the IIHS says aggressive behaviour is a bigger piece of the pie than skill.

"The evidence is really incontrovertible that men as drivers take more risk," IIHS spokesperson Anne McCartt told the New York Times. (For the guys who are reading this, "incontrovertible" means there's no point in arguing about it.)

And while men even have accidents gawking at women, very few women ever bothered to get into an accident ogling your sorry butt. According to ABC News, 29% of men admit to being distracted by women's summer attire while driving, compared to only 3% of women scoping out the boys.

Yes, guys, that's true. All we care about is: What colour is it and does it match our nail polish? Does it have enough cupholders? And can we finance it and still have enough left over for our subscriptions to Vogue and Entertainment Weekly?

Women are actually pretty savvy when it comes to buying cars, and while the statistics do say that horsepower isn't at the top of the list, we've got a pretty good head on our shoulders when we go shopping.

According to "Marketing to Women" author Marti Barletta, more women than men seek advice from an authority before buying a car (and no, "authority" doesn't mean you), spend more time in the purchasing process, and shop at an average of three dealerships to get the best price and best customers service.

Yes, I'm sure some of us do. I'll be the first to admit that some women are idiots, just like some men. But let's not tar us all with the same eyelash brush.

According to Australian insurance provider AAMI, men are more likely than women to have lost concentration while changing the car stereo (42% versus 38%), and more likely to use their cell phones without a hands-free accessory (21% versus 16%).

According to NHTSA, women are more likely to be distracted by children in the back seat, but hey, maybe if Daddy pitched in a little more ... I'm just saying.

Men are more likely to be distracted by nav systems, to use smartphones for driving directions, and to use portable music players with headphones.

Women are, in fact, more likely to be distracted by personal grooming: 8% compared to 3%. However, anecdotally, I can say that more than once I have seen men doing unspeakable things with their, um, let's say joysticks while behind the wheel. I have yet to catch a woman with her hand down her pants.

If you believe all those YouTube videos, it's certainly true, and not long ago researchers at Ruhr University in Germany found that, among 65 volunteers doing the study, the women took about 20% longer to park the same car, whether head-on, reverse, or parallel parking.

However, a report by Britain's NCP (a parking operator) surveyed and ranked 2,500 drivers on aspects of parking such as locating a spot, timing, and positioning within a space and found that women out-performed men on most counts, even though only one-fifth of women surveyed felt that they were better. (Not only good at parking, but humble! High-five, ladies!) The fact that we drive more slowly let us find parking spots more quickly, while men wasted time and gas driving past spots and circling around.

The study found that women took on average 21 seconds to park, compared to 16 seconds for men (which adds up to a depressing three more days of our lives spent parking, apparently), largely because 56% of women were likely to reposition their cars if they were off a bit on their first try, compared to 29% of men, who presumably simply muscle it in and leave it where it lies.

Men tried to park in smaller spaces even if a larger one was available if a woman was present - show-offs. Women were more likely to properly reverse into a spot than men.

Two studies released in 2011 reported that it's confidence, not gender-specific abilities, that lets men generally outperform women on spatial tasks - that if we reject stereotypes, performance by the stereotyped group typically improves.