The Highway of Terror

As I drove along the Highway of Heroes the other day, it occurred to me that as apt a name might be "Highway of Terror." People drive like blind monkeys with lead feet, and it's becoming the rule rather than the exception.

I planted myself in the centre lane at 120 (the speed limit is 100 km/h), passing several vehicles in the right lane (to be expected) and a few in the left (so annoying). But for every vehicle I passed, two passed me, most coming within a couple of feet of my rear bumper before veering indiscriminately into the right or left lane, zooming past, and cutting back in front of me with the same narrow margin. Some, I suppose it should be said, with a token blip of their turn indicators. 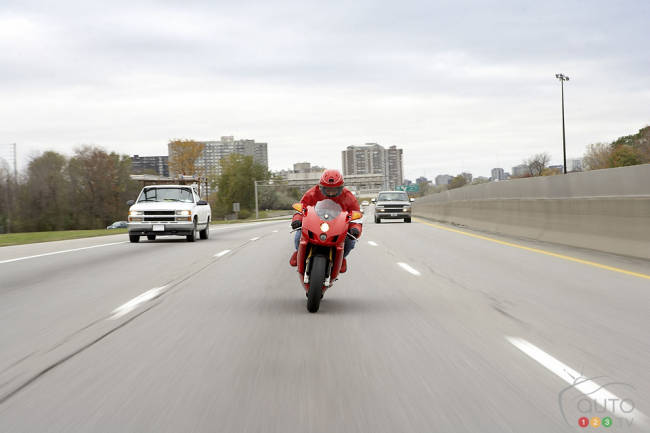 Why do nice people get in their cars and become A-holes?

If someone isn't moving quite fast enough for you in a supermarket line, you don't rush her from behind, veer around and cut back into the line in front of her.

If someone at a pedestrian crossing waits a beat too long after the flashing hand turns into the little walking man, you don't scream "BLAAAAAAT!" in her ear.

If you're leaving a concert and are about to hit that inevitable, annoying bottleneck at the venue exit, you don't bolt for the sidelines, run like hell to the gate and, all the while pretending you don't notice the dirty looks you're getting, push in front of everyone else to get out first.

If someone passes a little too close to you on the sidewalk, you don't spin around and flip him the bird.

Most of us aren't routinely rude to everyone around us. We certainly don't recklessly imperil each other without a second thought. So why is it OK when we get into our cars?

Research has shown that people driving convertibles with the top down are more courteous than those in hardtops. We think we're anonymous - it's that same delusion that convinces us no one can see us pick our noses. We can't be held accountable if no one knows who we are.

We feel safe from retaliation, which is exactly why bullies pick on the small, ill-prepared and weak - if I scream an obscenity at you in person, you might flatten me. If I cut you off in my Lexus, what the hell you going to do about it?
We're isolated from the forms of communication we use to finesse our way through public life - a smile, an eyebrow raise, a whispered "'Scuse me", a nod of understanding and encouragement. All we have are our horns and our middle fingers.

We look at other cars and see - other cars. Not people. We see Hondas and Fords and Kias, not Jim Smith, the fifth-grade teacher at the local elementary school, the one who sometimes wears two different socks and was so nice to our kid that time she fell off the monkey bars and needed stitches.

Plus, we're surrounded by a few thousands kilos of steel, and even the slowest among us can go from zero to 100 in 20 seconds - we are drunk on the power.

I suspect there might be a Revenge of the Nerds psychology at work for some too. I may be a five-foot-three-inch pharmacist with a tiny willy and a harridan of a wife, and you may be a tennis instructor who looks like Brad Pitt, but when we're at a light, and I'm in my Cayenne S and you're in your Yaris, guess who's the bigger man.

Sadly, I don't think we're going to fix the problem any time soon. Too many of us take too much s**t too often to not take advantage of moments of anonymity and potentially lethal power.

So what can we do? Leave earlier - sounds goofy, but feeling rushed exacerbates the problem. Walk or ride a bike when you can. Don't drive angry. Take advanced driving courses.

Better yet, with the (lack of) winter many of Canadians had this year, let's just all drive convertibles.