Because we all get older

When you're young, it's easy to joke about losing your keys. Come to think of it, everything is easy when you're young. But once you get to be my age (let's just say it's somewhere between Jennifer Lopez and Trini Lopez) it becomes an Alzheimer's self-diagnosis.

I have had more than one approaching-twilight-years friend tell me over lunch, "I could not find my keys this morning. I mean, I couldn't find them anywhere." Voice then lowers to the kind of whisper you use when you want to talk about something bad that can happen, but don't want to tempt fate.

"Do you think, I mean, I know it's early, but could I have ..." and they leave the question hanging; but we both know where it's going.

Losing your keys, it is a well-known fact, is the first sign of a descent into decrepitude.

I, for one, have been losing things on a daily basis since birth, so I worry less about senile dementia and more about just plain, "Dammit! I'm late, where are my keys!?"

As someone who has been known to find the remote on the back of the upstairs toilet tank, her bank card between the couch cushions, and her reading glasses perched on her head after half an hour's frantic search, I was excited to get my hands on the Smart Products Wireless Key Finder. 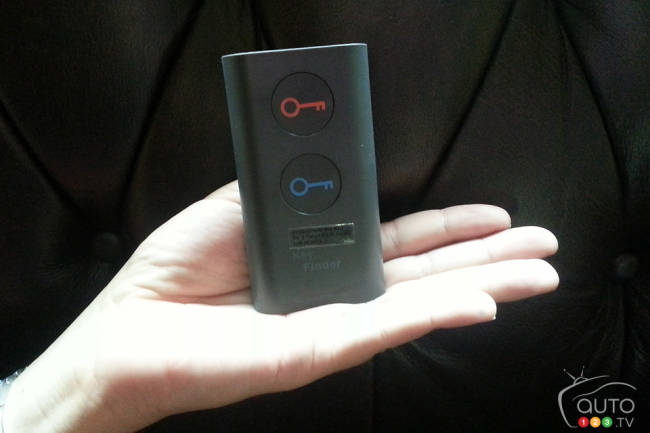 The base and handset don't add up to much more weight or volume than an iPhone, with the former a nicely weighted, discreet black stand just big enough for the handset. The handset, which boasts a pleasant matte finish, fits perfectly in the palm and has just two big, round buttons: one with a wee orange key; one with a wee blue one.

Simple, easy to use, but one wonders at the wisdom of giving absent-minded people another item to lose. Perhaps they should have put a button on the base to help you find the handset, should the need (inevitably) arise. I also wonder what happens when the day I lose my keys coincides with the death of the handset's two (easily accessed) AAA batteries.

The key fobs -- one orange, one blue -- are the approximate shape of a Junior Mint with the diameter of a quarter. A bit on the unwieldy side, but lightweight, and once I got used to it bobbing around on my Spartan key chain (I am not one who likes to carry every key I've ever needed around at all times) I stopped noticing it.

The fobs are powered by a 3V lithium battery which, fortunately, have a long life because once I used a coin to pop off the back of the fob to get a look at it, I had a heck of a time getting it back on.

While the manufacturer claims about 60 feet of signal strength, it didn't beep from the master bedroom on the second floor of my small, two-storey when I hit the button in the living room. You'd have to carry the handset from room to room, which only increases my odds of losing it. If your hearing is less than bat-like, you're going to need to be in the same room anyway; it could stand a little more volume.

Overall, an excellent idea, executed reasonably well. For about $15, you couldn't ask for much more. It may also have some sort of magical preventive powers -- I haven't misplaced my keys once since I got it.