It sure sounds like grist for the rumour mill.

But how I came to share a pillow case with a well-known auto-writer and on-air personality is a story that started out innocently enough.

I was scheduled to drive the glorious 2012 Porsche Panamera Turbo S over the holiday season. Unlike most of the large manufacturers whose press fleets are distributed from a huge factory parking lot, the Porsche cars are managed by just one man, who often delivers them to points all over Ontario and Quebec.

I came to know and admire Rick Bye, a Rothman's Cup champion who boasts the highest number of laps around Mosport of any race driver in history, during last year's Porsche Cayenne drive across Alaska. So when asked if I could help out by ferrying him in between the car he was dropping off and the one I was to collect, I didn't hesitate.

The problem? What to do with my own car, a humble yet indispensable ‘92 Mazda I dubbed my "leave-behind" since it spends most of its days parked in factory lots all over Metro.

Surreal might best describe the experience of watching one of Canada's best-known racers drive away in my $900 beater, while I held the keys to a $209,000 German luxury car.

The cabin of the Porsche Panamera is indeed a very fine place to be. Replete with plump, fragrant, hand-stitched leather culled from fat Austrian cows grazed in wire-free, bug-free Alpine meadows, the cockpit's a study in crème brûlée. 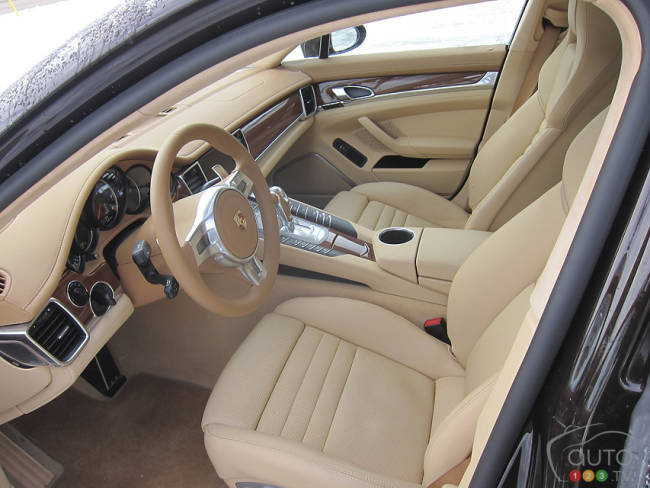 Aesthetically satisfying though the expanse of butterscotch carpet may have been, I nonetheless viewed it with dismay. Schlepping my winter crud-encrusted boots onto that pristine territory seemed somehow verboten, and of course, I'd forgotten my extra set of mats in my beater. The rest of the week I made do with a series of old but clean bath towels placed carefully beneath the pedals.

I'd already made car-exchanging arrangements with the illustrious Jim K., thus saving Porsche-man Rick yet another trip. It had been a filthy, sloppy snow and sleet-filled week, and I gave the Panamera a thorough going over to ensure it was immaculate. Heading out the door, I realized that all the towels were filthy, and quickly grabbed the next best thing: a pink pillowcase.

Our rendez-vous at Fourbucks coffee shop twixt here and there, we exchanged cars and went on our merry ways - I completely oblivious that I'd forgotten my unorthodox floor covering until I received a text that said merely, "Rosebud???"

All good things must come to an end, and so did my time spent with Zuffenhausen's finest.

Reluctantly, I returned the Porsche and, sighing deeply, clambered into my leave-behind.

There on the seat, clean and neatly folded, was my pink pillowcase.