Dodge La Femme: going over the top to please women

I was looking to write a story on the evolution of women within the auto industry when I stumbled upon one of the biggest flops of all time.

As you know, the world of cars has been dominated by men for a really long time. In 1898, some courageous women dared to leave the passenger seat and step behind the wheel. The first woman to get a driver's licence was Marie Adrienne Anne Victurnienne Clémentine de Rochechouart de Mortemart, Duchess of Uzès. As a matter of fact, she also became the first woman to receive a speeding ticket... when she topped 15 km/h on a road with a limit of 12 km/h!

The Duchess went on to create the first car club for women, which didn't sit well in male circles. Back in the day, female car owners and club members took part in concours d'elegance, but since the vast majority of judges were men, these women were merely regarded as ''added value.'' Outrageous, isn't it? That was the sad reality in the early 20th century.

At the time, selling cars was a completely different business. People would buy the powertrain first before heading to a coachbuilder to have it wrapped in some wooden shell and laid on four wheels. Manufacturers soon began to design models that would appeal to women, with more stylish lines and little extras. Nothing too fancy.

And then came the first automobile specifically aimed at women, courtesy of Chrysler engineers: the 1955 Dodge La Femme. It came with the slogan ''By Special Appointment to Her Majesty... the American Woman.'' Flattering, don't you think? 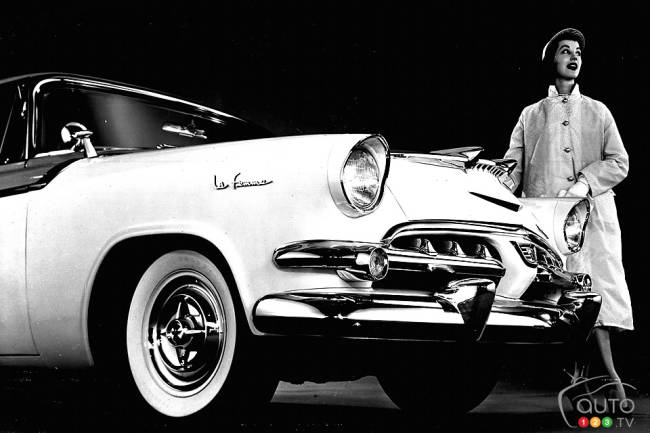 Chrysler made sure that the world's first ''chick car'' would not go unnoticed. They decked the entire body and cabin in pink! Okay, not all of it; there were some white panels and a generous amount of chrome as well, not to mention golden trim pieces on the back, fenders and glove box. The truth is, the only other time a manufacturer used that much pink was when Mattel created the Barbie Corvette.

Wait, there's more! In order to appeal to trendy middle class women of the '50s, Chrysler offered a wide selection of accessories with the car. The list included a rain coat, rain bonnet, umbrella, purse, lipstick case and face-powder compact. Obviously, all matched the colours and logo of the La Femme. On the back of the driver's seat was a compartment that women could use to store a hat and purse.

Under the hood, well, it was a whole other story. This Dodge coupe featured a rugged and manly Super Red Ram V8 engine producing 183 horsepower. A more potent 193-horsepower version was also available at an extra cost.

Unfortunately, there is such a thing as going over the top, and as Chrysler quickly found out, the La Femme proved to be a colossal failure and was sold only during the spring of 1955 and 1956. The car benefited from little advertising, so many consumers never even knew about it. Overall, fewer than 1,000 units have been produced.

It's great that an automaker cared about women, but if you ask me, it seems like Chrysler was treating them a bit like children. You know those toy make-up kits and fake jewels that little girls play with to feel like adult women? Well, there you go.

Considering the lack of popularity of the Dodge La Femme, I'm thinking that many women back then must have felt this way. The car did have some character and could have enjoyed lots of success if Chrysler hadn't given women the impression of driving around in a big rolling candy.

Automakers have since learned the lesson: women want a vehicle they can identify with, and there's a way to feel feminine without overdosing on pink. Today's so-called ''chick cars'' offer women multiple customization options instead of forcing some ridiculous junk down their throat. The Fiat 500 is a prime example.

I love pink just as much as I love purple and blue. I feel comfortable in jeans as much as I do in skirts. Yet, I will never drive a car that's blatantly created to "please" women. And I'm pretty sure I'm not the only one... 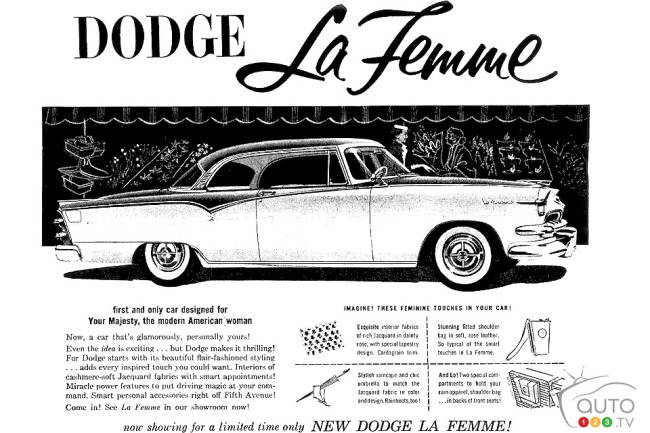 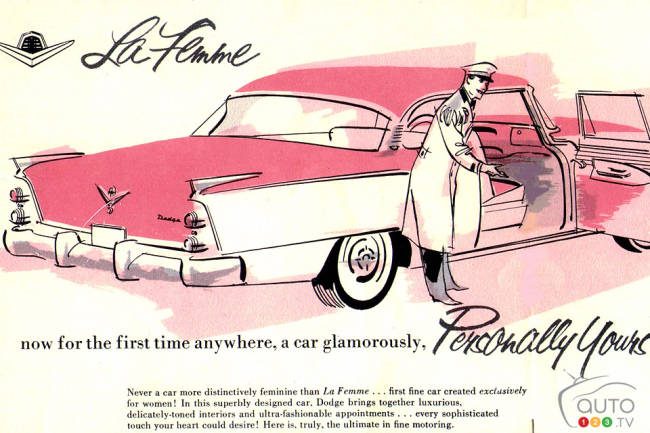