When it comes to car seats and safety, BRITAX is usually one of the companies at the very top of the must-have list. In the industry of producing safe seats for children for more than 70 years, BRITAX knows a thing or two about keeping your little one safe when you're on the road. They've even gone so far as to work with manufacturers to produce seats that aren't just safe, but compatible with today's vehicles and their own safety specs.

Truthfully, BRITAX was the No. 1 choice of seat for my own son. My husband and I were set on spending the near $400 price tag to purchase a BRITAX car seat -- until we tried to fit it in the Subaru.

While there's no denying that the BRITAX is loaded to the brim with safety features for your child (True Side Impact Protection, SafeCells, Integrated Steel Bars, Side Impact Cushion Technology, Energy-Absorbing Versa-Tether, and the list goes on), all those fancy features mean the seat is absolutely ginormous. With massively deep side walls and high bolstering, the seat takes up quite a bit of property on the backseat as a rear-facing seat, and not with its footprint. The base is actually quite small (and I'll get to the install in a moment), it's the rest of it that's big.

The first vehicle I installed the BRITAX Advocate 65-G3 in was a brand new 2013 BMW 740Li. That is no small car. The "L" stands for the fact that it's a long wheelbase model (read: huge). An extra-large backseat meant extra-large door openings and space for a seat. Installing the BRITAX Advocate in the back of the 740Li was no easy task thanks to the deep leather seats (that required the use of a towel under the base to get the right angle) and the recessed car seat hooks. However, it was the space left to place my son in the seat that shocked me.

The bolstering is so high and the base so tall on the BRITAX Advocate 65-G3 that the seat sits extremely high in the door frame. As the BMW 740Li is a "sportier" model (as is our Subaru) the doorframe rakes down at an angle, and that angle is cut more sharply by the sheer size of the BRITAX car seat, limiting access to the actual seat. 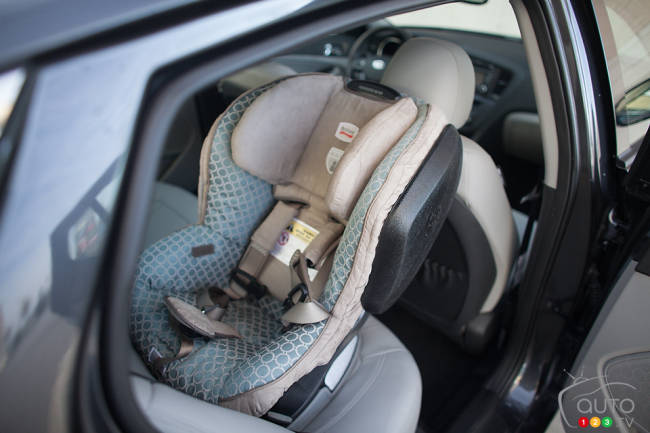 Buckles, belts and latchs -- oh, my

The bane of my existence as a mother who puts her son in a car seat every day is the bloody buckles that constantly twist and get stuck. However, blissfully, the BRITAX Advocate 65-G3 features twist-free, 5-point harness system that is very easy to loosen and tighten with a Click & Safe Snug Harness Indicator that audibly lets you know you're tightening the straps with a "click."

After installing the BRITAX Advocate 65-G3 in the BMW 740Li, I was reluctant to take it out (even though I had to). I feared it would be just as difficult to remove as it was to put in. However, I was pleasantly surprised as the BRITAX seat features these nifty Premium LUAS Connectors that have a push button for easy release. And where my Safety 1st Guide 65 Convertible car seat only has one tightening strap attached to both hooks, the BRITAX features a separate tightening strap for each hook which makes securing the seat that much easier as well.

And my second install in a 2013 Kia Optima was much easier, and the shape of the car's door opening allowed for much more room to put my son in the BRITAX Advocate 65-G3 seat.

Offered in five different fabric choices, the BRITAX Advocate 65-G3 is a good looking seat. It also looks much more complicated than it actually is. I was intimidated by the entire thing when I first went to install it in the BMW, however, my fears were unwarranted. Good up to 40lbs rear-facing and 65lbs forward-facing, the BRITAX Advocate 65-G3 is also built to last. I have a feeling the seat will be much more user-friendly when we switch it to front-facing.

Is it worth the suggested $399.99 MSRP price tag to own a BRITAX Advocated 65-G3? It is one of the pricier car seats out there, and with good reason. The list of safety features just goes on and on. However, the sheer size of it will limit who can own it, for sure. If you have the vehicle for it (SUV, CUV, something with wide, high rear door openings), then this seat is most definitely for you. If you have a smaller vehicle, please test out the seat in your car before you purchase it. You may have to keep shopping.