I know what you're thinking: Auto-Venus.com is a car website, so why in the world are they reviewing a stroller? Well, before you ask any further questions, take a look at the video of the 4moms Origami stroller below.

That's right: The 4moms Origami folds and unfolds itself. Every mother out there is salivating at the bit for this stroller right now, I can guarantee that. And not because we're lazy or unable to fold strollers, but because it makes it so unbelievably handy to have a stroller that does it all by its lonesome. Imagine being able to fold and store a stroller with one hand. As mothers, we end up doing everything with one hand anyways (while the other carries our child), so this stroller is a godsend.

The 4moms Origami stroller features a power-folding system that opens and closes the stroller at the touch of a button (a very fancy looking button on the handlebars that also requires a specific combination of a turn and click to prevent young children from activatingit).

When the 4moms Origami folds and unfolds (in under 10 seconds), it travels if you don't have the one-push brake engaged. I opened the stroller in a parking lot without putting the brake on and it nearly opened up into a neighbouring car. Not that it would have done any damage, but it would have been rather embarrassing as everyone seems to stare at the Origami no matter where you go.

And there's a reason they stare. Besides the super futuristic and modern design of the stroller (which I absolutely love), the 4moms Origami also features daytime running lights on the front wheel bars. They are on most of the time, and when the outside lighting dips lower, pathway lights illuminate under the wheels to offer even more visibility.

Modern amenities for the modern mom

The 2" x 4" LCD screen also lights up blue in low-light situations. Yes, it has an LCD screen. At this point, things like that shouldn't be shocking! The 4moms Origami features an LCD screen that not only tells you the temperature outside, but also clocks how fast you're strolling (speedy moms beware) as well as trip and lifetime odometers. There's also a fancy little cartoon of the stroller itself. When a child is in the 4moms Origami stroller a cartoon baby will appear on the stroller which will deactivate the self-folding system. So, there is absolutely no way you can fold your child away with the stroller.

And don't worry; you don't need to plug the 4moms Origami in every night to ensure its folding abilities. The stroller features generators in the rear wheels that charge the Origami while you walk. And with an optional accessory you can even charge you iPhone at the same time -- again, something we moms are sure to appreciate as I can't tell you how many times I've been out with a dead phone because I forgot to plug it in the night before.

If you don't use your 4moms Origami for a long period of time, there is a plug for charging and a manual override to open and close the stroller. 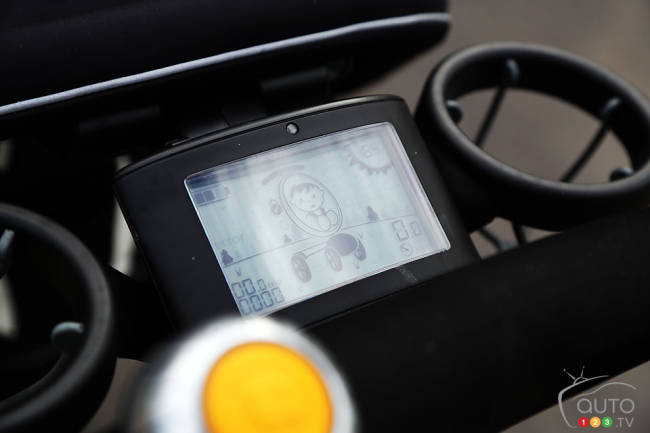 Is it too much?

Here's the thing with the 4moms Origami stroller: I am absolutely in love with it. It's easy to use, comfortable for my child, features four cupholders, a sun-blocking hood, available coloured seats, ample storage, it rolls well and it gets loads of attention. But, I can't help but feel it's a bit too much. As in; there's too much to go wrong. Within the first week of having it, the fold button malfunctioned on more than one occasion and required multiple attempts to activate the fold and unfold mechanism.

One of the front wheels also popped off randomly after the stroller was unfolded and my son was already in it. I leaned the stroller back and took the weight off the front wheels, and it just fell off. It was easily put back, but this is not something you want to happen on a stroller that costs close to $900.

It's not that the 4moms Origami is a badly built product, because it's not. It's sturdy and features a strong spine and overall structure. It handles extremely well with a 4-wheel suspension that means my son stays relatively unmoved no matter what the terrain. It's also built to "last" and can accommodate children up to 40lbs, and can even be paired with the Graco SnugRide car seat for newborns. The stroller itself weighs 32lbs, which is also important to note for smaller women wishing to purchase the 4moms Origami -- this is no lightweight system.

The 4moms Origami is paving the way for other companies to jump on the self-folding bandwagon, and for that alone we should thank and praise them. 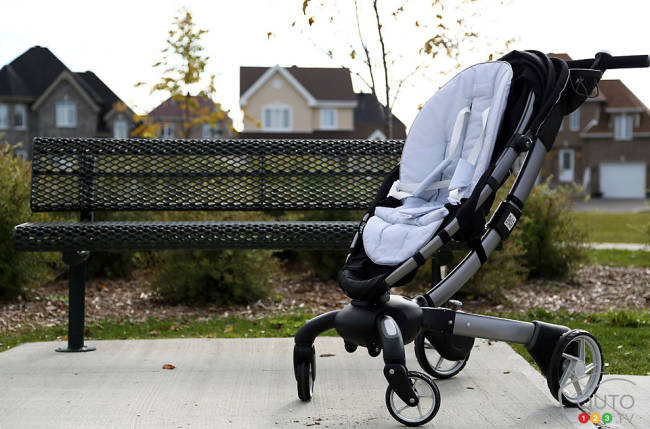 So, it's been about 6 months since I first pushed the bright orange button on the 4moms Origami stroller and watched it miraculously (and effortlessly) open itself via a battery-charged motor. Fantastic. What's not so fantastic is the performance of said stroller in the cold, Canadian winter.

As the mercury dropped, so too did the stroller's usability. On more than one occasion the fully charged battery failed to power the motor leaving me stranded with a half open (or half closed, depending on what type of personality you have) stroller I then had to try and manipulate manually -- or shove back in the trunk in its half-morphed state, which is what I was apt to do.

With temperatures in the -40 degrees Celsius range, these were extreme conditions. However, I did not leave the stroller outside, not once. It was always in a heated garage, even plugged in. The short drive to the store in the cold, cold trunk was enough to mess with the battery life.

Also, manoeuvring the 4moms Origami stroller in the snow was actually quite difficult. The wheels are rather hard and so slippery with very little traction. Not ideal for snowy conditions.