Why did it take me so long to drive this?

Oh, I know: because now that I've driven it, I can think of nothing else. I find myself running through the financial possibilities (or rather the lack thereof) to own one. How would it feel to sit in one every day? How would I finagle my condo board into installing a charging station in the back parking lot? How would I plan epic road trips because, let's face it, I'd want to spend as much time behind the wheel as possible?

But mostly, how am I going to lock up another test drive as soon as possible to get my next Tesla fix? 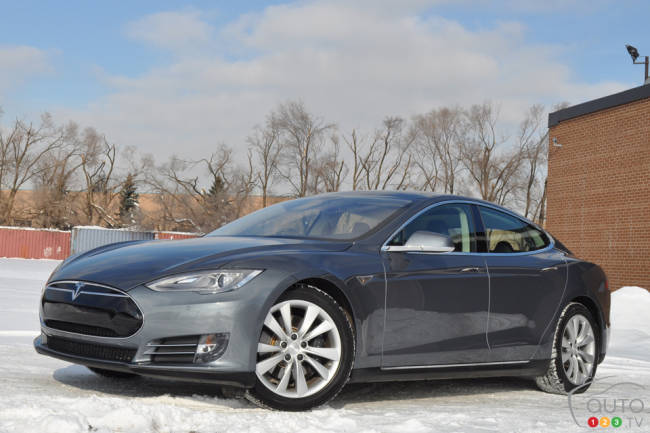 It really is that good

Tesla, Tesla, Tesla; the model name has been on the tip of everyone's tongue since the first Model S production vehicles appeared in 2012. Sure, the Roadster popped up before that, but the Model S made Tesla real, made it practical, made it accessible.

From its stunning looks to its performance numbers, the Tesla Model S grabbed everyone's attention, and rightfully so. Here is a fully electric vehicle, now with an estimated 500km of range, and 360 horsepower (420 ponies if you opt for the P85+), with seating for 5+2 (there's a rear-facing bench with seating for two as an option), with a host of supercharging stations across North America that can be used for free. And you'll never have to visit a gas station again. Ever.

All of this can be had starting at just over $80k.

That might seem like a lofty number to pay for an electric vehicle, but consider again what you're getting.

At the forefront of it all

Tesla Motors has changed the way the general public sees electric vehicles. They've attacked the stigmas away, faced the stereotypes head-on, and all but silenced the naysayers. They've done for EVs and green cars what every other manufacturer has been trying to do for a few decades now: made them cool.

Now, I'm not saying that "cool" is worth paying close to $100,000 for, but it definitely goes on the list of "why it's a good idea to dish out that much cash for a Tesla Model S." In that same column you can write: no more gas stops; good for the environment; performance driving; fast as f*ck; luxury amenities like a 17" touchscreen in the middle console; available AWD model now up for purchase (the D!); safety features like Autopilot; and practicality.

I could go on and on. It really is that good. I can't stress that enough.

But it's an EV, so it must be rather dull to drive.

Here's where you're really, really wrong. I thought it would be a bit of a snooze-fest too, at first. Zero engine noise, no exhaust note, no gears, nada. This thing is like a remote control car you happen to use a steering wheel to control instead of a joystick. But here's the thing; it's actually really, really exciting.

For starters, the 325 lb-ft of torque is fabulous and instant, in a head-mashing-into-headrest kinda way. There are no gears to cycle through (rather like the smart e-drive and new Kia Soul EV). Power is instant and gas-car crushing. With a whirring of the electric motor and whoosh of air, you're suddenly doing speeds you should probably be arrested for, but that's OK because the Tesla Model S' Brembo brakes will ensure you come back down to earth (and sane speeds) in a jiffy.

Everything, absolutely everything, can be modified and changed via the onboard computer system. From the air suspension to the steering input and feel, you can modify your Model S to drive precisely how you want it to. Feel like being a baller for the day in your dumped Model S? Lower the suspension to its base setting, crank the tunes, and lean back. Feel like impressing your friends or embarrassing gas-guzzlers who think you drive a pansy tree-hugger's car? Switch the throttle response to "insane" and watch jaws drop.

With vehicles like the BMW i8 and Porsche 918 Spyder hitting the market, you'd think Elon might be getting a bit nervous about it all. But why should he? Tesla started the trend. The Model S proved that luxury and performance can be had in a vehicle that burns zero gas, and that it can be used for more than just inner-city commutes.

I tried desperately to find a truly negative thing to say about the Tesla Model S P85, and truthfully the only thing I can come up with is the fact that they made me give back the key; those bastards.