Pun fully intended; I implore anyone in the market for a small car to take note of the new Nissan Versa Note. Seriously. It’s well worth the exploration, and I’m pretty sure you won’t be disappointed.

Sure, there are plenty of other small cars on the market right now and they all offer something slightly different over the other, but there’s something about the Note that just pulls at you. You’ve got to drive it to understand.

The Versa Note is, essentially, a brand new Versa hatchback (essentially the second generation) with an extra name tacked on the end. If you want the sedan version, it is not called the Note, simply the Nissan Versa Sedan. 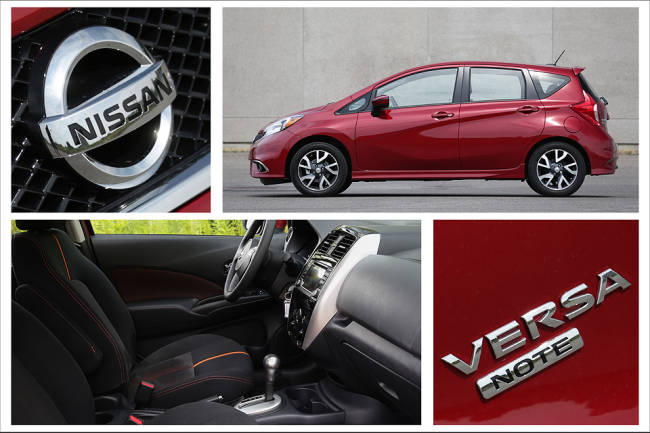 For starters, the Nissan Versa Note looks a helluva lot better than the old Versa used to. Nissan’s design language has changed for the better over the years, that’s for sure. My first thought upon approaching the Versa Note head-on is: Hey, looks like a shrunken Quest! And while my love of the Quest’s exterior looks is pretty much nonexistent, the miniature version of it on the Versa Note strangely works and I’d even venture to say I really quite like it.

What’s really different about this particular Note is the fact that it’s an SR, a model that didn’t exist in the previous generation. With a redesigned front fascia and SR-exclusive front grille and rear spoiler, this Note has some road presence the other models are rather lacking. Attitude goes a long way when you’re dealing with small cars.

Inside, Nissan’s family design language is present and makes the cabin a cozy, comfy place to be, however, there are SR-specific elements here too: A JUKE-inspired steering wheel and contrast-stitching race-inspired seats that feature an orange accent stripe down the middle complete the sportier interior look.

Otherwise, it’s business as usual with the same mill found across the board, a 109-horsepower 1.6L 4-pot coupled with Nissan’s Xtronic CVT. All power is sent to the front wheels. A 5-speed manual transmission is available on other Versa Note models, but not the SR. 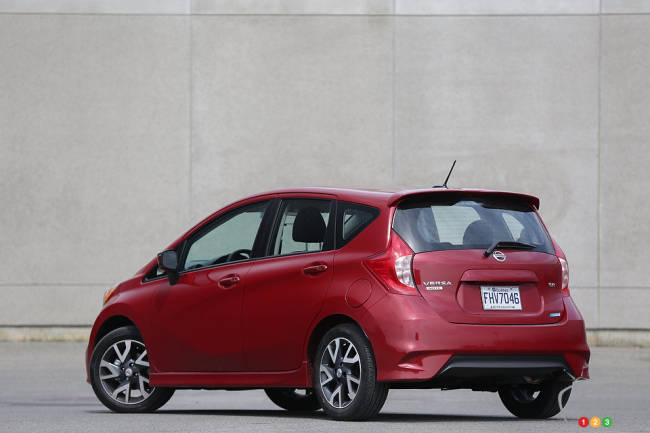 For starters, the Nissan Versa Note looks a helluva lot better than the old Versa used to. Nissan’s design language has changed for the better over the years, that’s for sure. (Photo: Philippe Champoux)

I may be the wrong person to talk about CVTs, but here’s my take on it: If you really don’t take great pleasure in driving and/or shifting your own gears and you’re not one to floor it too often, then CVTs are absolutely perfect for you. Yes, they are fuel efficient -- I averaged 6.7L/100km throughout my week with the Versa Note, which is actually lower than the estimated consumption of their newest golden child, the Nissan MICRA. They work well, but they’re also kind of, well, dull. The drone of Nissan’s CVT has been much improved since it first appeared in the Murano well over a decade ago. It is now, perhaps, one of the best, along with Honda’s, in the market as of this writing.

Personally, I’d opt for the manual if only to add a little bit of excitement to your time behind the wheel...

Is it too small to be a family car?

Actually, no. I was pleasantly surprised with the interior space in the 2015 Nissan Versa Note. With a rather high roofline, the headroom is uncanny and makes the cabin feel airy and large, even in the back. The 90-degree door openings also make for super easy ingress and egress from the backseat, and made loading and unloading my son a breeze. I even had a local furniture store worker marvel at the interior space as he loaded a small dresser into the backseat for me.

With the rear seats up, the cargo space in the Nissan Versa Note is 532.4 litres; with them down, that number jumps to 1,084 litres (which is actually more than the JUKE offers with its seats folded flat!). 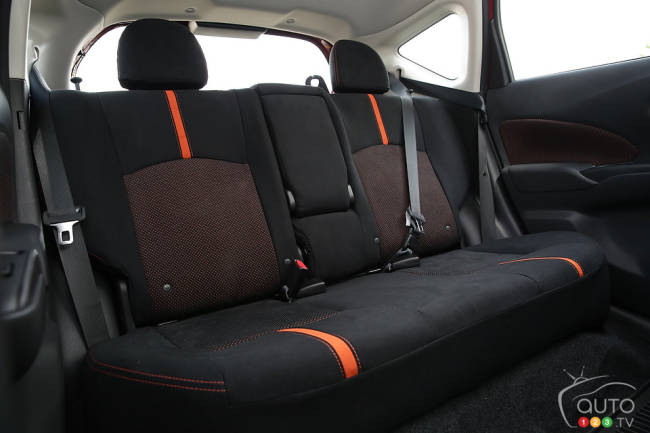 I was pleasantly surprised with the interior space in the 2015 Nissan Versa Note. (Photo: Philippe Champoux)

Well, you should be. Nissan’s lineup is smart to say the least. Those walking into dealers curious about the MICRA and it’s sub-$10k price are walking away with Versa Notes (or the aforementioned MICRA) because it offers that much more in terms of amenities and space over the microcar for not that much more (when you look at the upper MICRA trims). Or the opposite is happening. Really, it’s an ingenious plan on their part.

A base 2015 Nissan Versa Note will set you back $14,298 (starting) and offers A/C and Bluetooth, whereas a midlevel MICRA that offers that plus remote keyless entry starts at just $13,698.

Of course, my sporty SR is the highest-priced Nissan Versa Note and starts at $18,698. However, if we’ve learned nothing in the automotive world, we’ve definitely come to terms with the idea that if you want to look the part (and look good), you have to pay the price to do so.

But is it the best hatch in the segment?

Besides competing with its little sibling, the Versa Note is up against some serious contenders in the just unveiled and all-new Honda Fit, the newly launched and redesigned Toyota Yaris, and the Chevrolet Sonic. So, is it the best? No. But it does check all the right boxes and is the ideal hatch for someone out there.