WASHINGTON, D.C. -- We found ourselves deep in the heart of fox-hunting country, where every fence line featured wooden coops just begging to be leaped over, and it was easy to imagine the baying of hounds echoing over rolling hills resplendent in their fall colours.

Our route encompassed the urban heart of Washington, where the country's most powerful do business, and the rural acreages in which they live.

The 2014 Mercedes-Benz CLA 45 AMG 4Matic we drove might turn heads anywhere else, but here it was accepted as a matter of course. 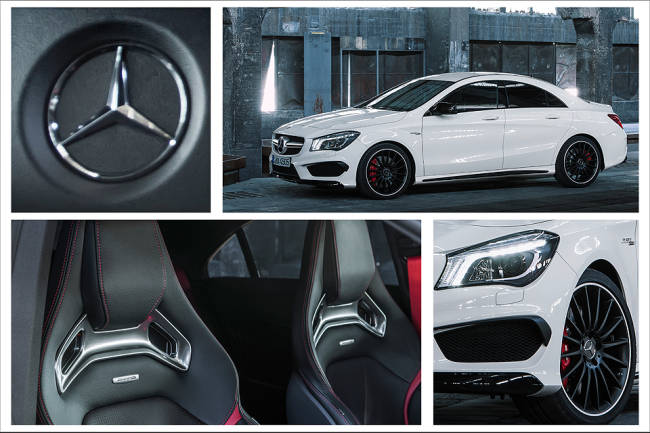 The CLA 45 AMG is the performance version of the CLA compact sedan.

For the first time in its 45-year history, the AMG performance arm of Mercedes-Benz -- known for their bellowing 8-cylinder engines -- has produced a vehicle powered by a turbocharged 4-cylinder. Not only that, but the 2014 CLA 45 AMG represents another radical departure for this venerable marque: It rides on a front-biased platform and features all-wheel drive.

AMG Chairman, Ola Källenius, describes the car as a "gateway to Gen Y," designed to attract younger folks who, until now, were unable to afford AMG. 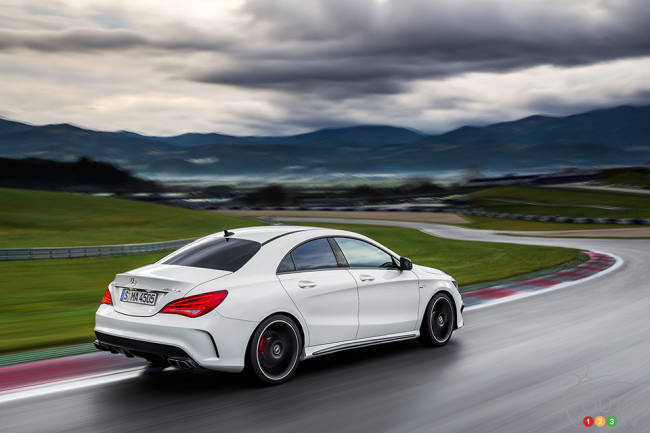 The CLA 45 AMG is the performance version of the CLA compact sedan. (Photo: Lesley Wimbush)

Some AMG fans may recoil in horror at the introduction of a compact 4-cylinder into the lineup. From the handbuilt 2.0L engine is somehow squeezed the highest output of any turbocharged production four-pot in the world: 335 horsepower and 332 lb-ft of torque. That's 147 horsepower over the regular CLA. That prodigious torque, available from 2,250 rpm, and turbo-boost that's been cranked up to an astonishing 26 psi produce an immediate responsiveness that's virtually turbo-lag free. 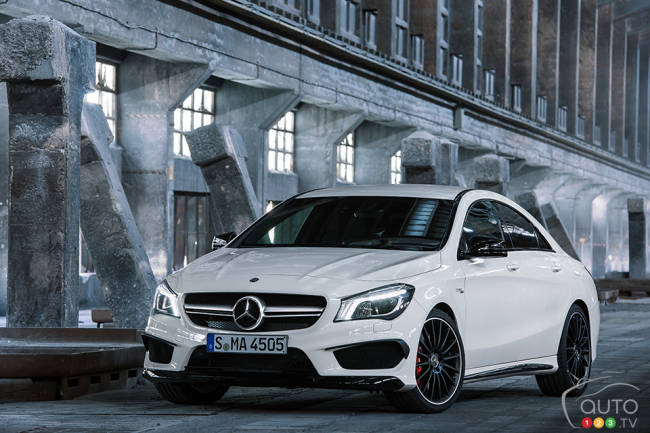 Some AMG fans may recoil in horror at the introduction of a compact 4-cylinder into the lineup. From the handbuilt 2.0L engine is somehow squeezed the highest output of any turbocharged production four-pot in the world: 335 horsepower and 332 lb-ft of torque. (Photo: Lesley Wimbush)

The CLA 45's compact size is perfectly suited to the pastoral roads of Virginia, and the thriving bustle of Washington's core. The lively chassis makes this one of the more nimble and fun-to-drive models in the AMG lineup. Fitted with the lower and stiffer AMG performance suspension (which has 20% stiffer front springs and 22% stiffer rear springs) our tester was a delight to toss around the curves.

The seats are comfortable and provide plenty of legroom up front, but the swooping roofline compromises rear headroom. The 2014 Merc CLA 45 is very quiet, with not much wind noise or road noise, and very little of the raspy exhaust note intrudes into the cabin.

On the centre console, the driver-selectable mode button toggles between Comfort, Sport or Manual. The first, and more sedate, option not only returns better fuel economy, but also shows consideration for the neighbours by keeping the exhaust note in check. The other two settings open the exhaust flap unleashing a guttural pop and snarl, and add snap to the 7-speed dual-clutch AMG transmission.

While more compliant in Comfort mode, the ride is still taut with little body roll. Switch it over to Sport, and the 2014 CLA 45 eats up the twisty forest roads. If the 45 AMG doesn't bellow like its 8-cylinder counterparts, the 4-cylinder's pop and burble is still quite satisfying. Paddle shifters can be used in any of the three modes. Only in Manual mode does the gearbox rely on them fully.

While the 45's default mode is as a front-wheel driver, the AWD kicks in at the first sign of slippage. Normally, this will constitute a 50-50 split, but extreme loss of grip (such as on high-speed cornering) can send 100% of the power to the rear. Despite being a front- wheel driver, the 45 shows little tendency to understeer. 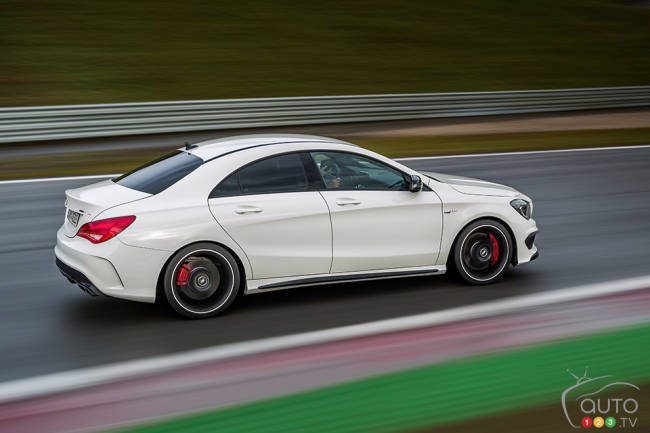 The lively chassis makes this one of the more nimble and fun-to-drive models in the AMG lineup. (Photo: Lesley Wimbush)

The 45 AMG is a more aggressively turned-out version of the regular CLA. The CLA 45's swooping lines are transformed by side skirts and a more aggressive front fascia featuring the twin-blade grill of the halo-car, gullwing SLS AMG. Large, gaping intakes add ferocity, and the rear fascia frames twin tailpipes. The sloping roofline gives this four-door sedan the sporty look of a coupe.

Optional AMG upgrades include carbon-fibre trim, performance seats, and the aforementioned red callipers and larger wheels. There's also an AMG performance suspension and exhaust package for those who, in Källenius's words, "want to get really crazy." 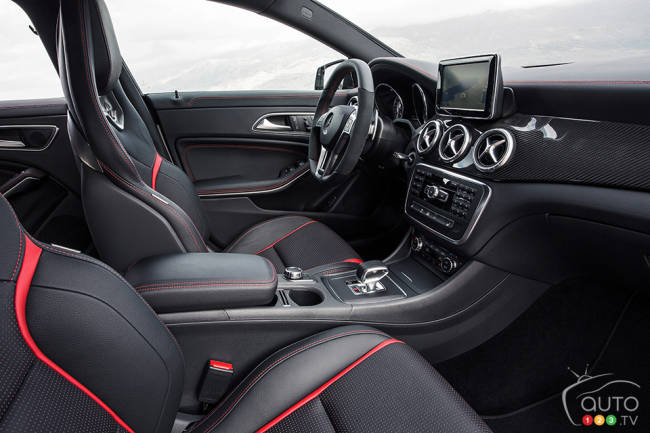 The cabin is also a cut above the regular CLA. (Photo: Mercedes-Benz)

A rather forgiving car, the 2014 Mercedes-Benz CLA 45 AMG is well-positioned as a conquest vehicle for AMG.