In Spanish, "si" means "yes." In regards to the Honda Civic, the Si stands for "Sport Injected." Whether referring to it in a foreign tongue or in relation to its given name, this breed of Civic is a whole lotta yes and a whole lotta sport. 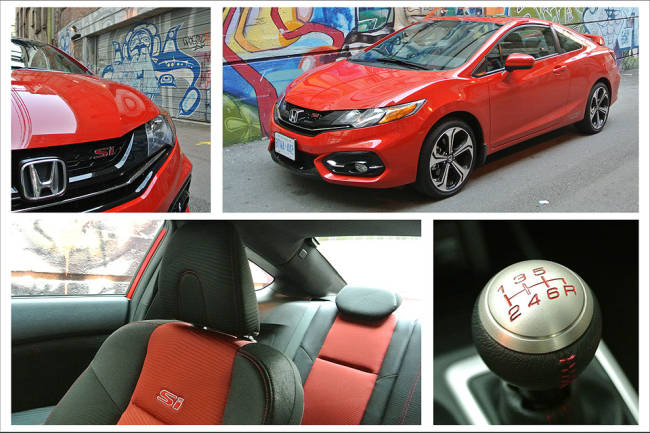 Taking the cake as the top-of-the-line Civic, it is (in my opinion) worth every cent of its $26,715 price tag.

If you're looking for a sexy coupe under the $30K price tag, the Si is a great place to start.

What makes it worth your hard earned dollars? Pretty much everything.

The gearbox, the seats -- not too restrictive but not too liberal -- the multifunction display screens throughout the centre stack and dash, and well, Honda reliability.

OK, the car is by no stretch perfect. I sometimes hit my knee on the lower dash when exiting (ouch), and the rear seats can be tricky to get into if you're a taller individual, but you're also captaining a coupe, and sometimes, that's just par for the course.

Dipping into the upper end of the rpm range is really where the magic happens. You'll know this through visual, sensational, and audible cues. To the left of the instrument cluster, the driver will notice circular red lights brightening as you come close to redline. You'll also feel the vehicle coming into its own and giving you the extra boost in acceleration that you pay the extra dollars for. So great.

What happens when you tap into that i-VTEC? Here's a very general overview of what's going on in the engine: when you're in the lower rpm range, two valves per cylinder are allowing airflow through the valves to the cylinders. Once you hit that magic number, it then switches to four valves per cylinder, giving the engine better performance because of increased airflow through valves to the cylinders.

I'm sure Honda engineers would like to step in here and add a few more things; but the bottom line is you get more gusto out of the engine. And like I said: it's great.

The gurgle of its exhaust isn't obnoxious, but has just enough grunt to make its presence heard, but not to the point where people roll up their windows because of the noise. We all know what kind of exhaust that sounds like, and it ain't classy. 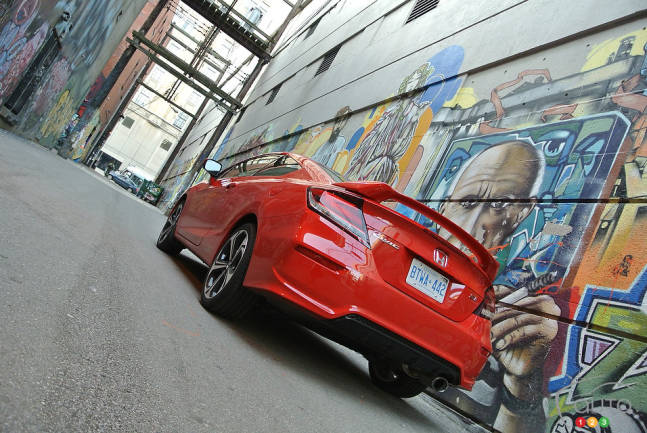 Taking the cake as the top-of-the-line Civic, it is (in my opinion) worth every cent of its $26,715 price tag. (Photo: Alexandra Straub)

Inside and Out of the 2014 Honda Civic Si Coupe

I hope you like red because if you aren't fond of the crimson hue, the Si might not be right for you -- or you just have to learn to appreciate it.

Inside, the colour of love welcomes you with open arms. With red stitching on the seats, steering wheel, gear selector, as well as on the multi-function displays, there's no escaping it.

The duality of the Si's personality is part of its appeal. What do I mean? Short-shifting or not getting too throttle-happy with the accelerator gives way to a temperament that is easygoing and very liveable in an urban environment. If you're stuck in traffic, the clutch has enough weight on it to interpret as "sports car" without the crazy left-leg workout.

Hold your gears and you have a completely new machine. The promptness of its throttle response and sound the Si make are to die for. Yes, it gets a little loud, but I believe that's the car telling you it's in its happy place.

Gear throws are silky smooth, and the 6-speed transmission (the only available transmission on the Si trim) is top-notch.

Cornering left me giggling like a schoolgirl. Ever seen a bug on your windshield holding on for dear life as you drove 100km/h and stay there until you get to a stop? Yeah, the Si holds fast to the pavement and doesn't waver. Granted, you wouldn't really want to do that in the rain or snow. Or maybe you would?

For an added bit of goodness, throw on some performance tires and you'll have nothing but an excellent day at the track. 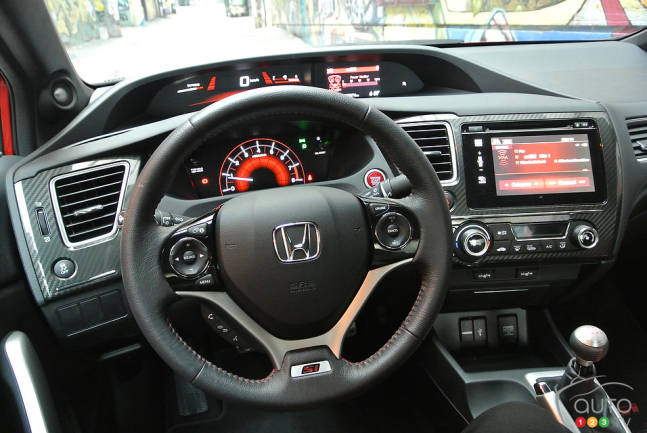 Inside, the colour of love welcomes you with open arms. (Photo: Alexandra Straub)

As great as the Civic Si is, it has a lot of strong competition. The all-new, seventh generation Volkswagen GTI is one of them. So is the Ford Focus ST. You can group the Hyundai Veloster Turbo and Dodge Dart GT in there as well.