I admit to feeling somewhat blissful as I approached the 2013 Fiat 500 Turbo in the far corner of the Auto123.com parking lot. This cute little city car from Italy has spread like a virus -- the most beautiful kind of virus, if you ask me -- since landing on our shores in 2011. Now, it's the Turbo's turn to make its presence felt on Canadian roads.

You have to sit behind the wheel to fully appreciate the appeal of the 2013 Fiat 500 Turbo. Fun is the word not only for the exterior looks, but also the driving experience. I was pleasantly surprised with the amount of power on tap and the accelerations it produces, even in 5th gear. My week with the Fiat 500 Turbo only amplified my longing desire to try the Abarth version! 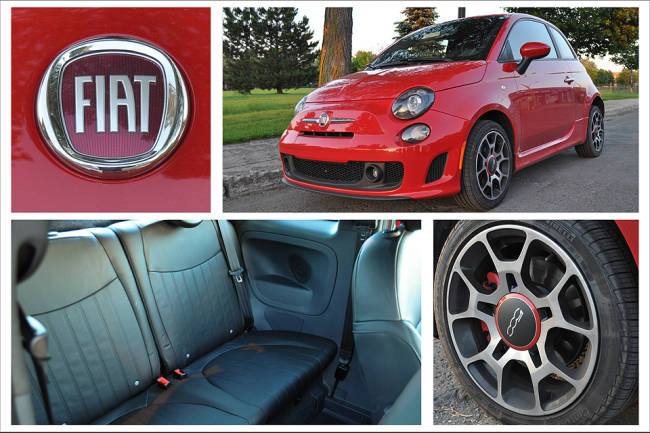 Let's not kid ourselves: You don't buy a Fiat 500 if you want to look mature and business-like while driving. This sub-compact hatchback is basically an oversized, motorized toy designed to put a smile on your face. 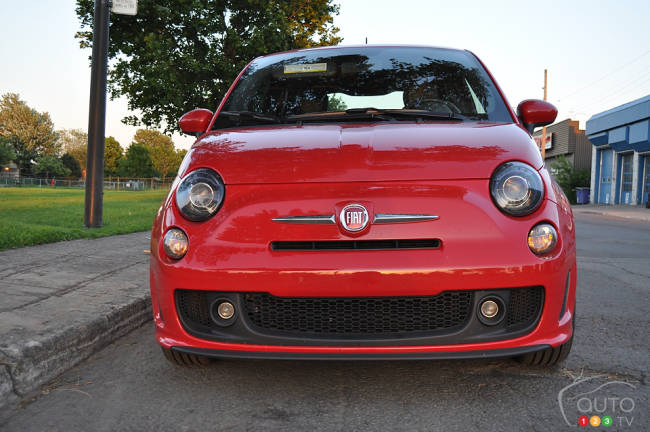 This sub-compact hatchback is basically an oversized, motorized toy designed to put a smile on your face. (Photo: Marie-Laurence Paquin)

The 1.4L, 4-cylinder, turbocharged engine under the hood of the 2013 Fiat 500 Turbo produces 135 horsepower and 150 lb-ft of torque, which is 34 hp and 52 lb-ft more than the naturally aspirated model (25 hp less than the Abarth). Twin intercoolers and a sport-tuned exhaust system help make it happen.

The lone transmission choice is a 5-speed manual. The suspension has been lowered (and connected to stylish 16" aluminum wheels), and the steering has been recalibrated. Let's not forget the beefier brakes!

Official fuel consumption ratings for the 2013 Fiat 500 Turbo are 7.1L/100km in the city and 5.7L/100km on the highway. I personally observed an average of 8.1L/100km during my test week. I expected better given the diminutive size of this runabout. On the other hand, these numbers are no worse than those of the previously tested Chevrolet Spark, which generates a meagre 84 horsepower.

The 2013 Fiat 500 Turbo also comes with a Sport button that automatically alters throttle and steering response, as well as shift points. You can feel a difference, but nothing too special. 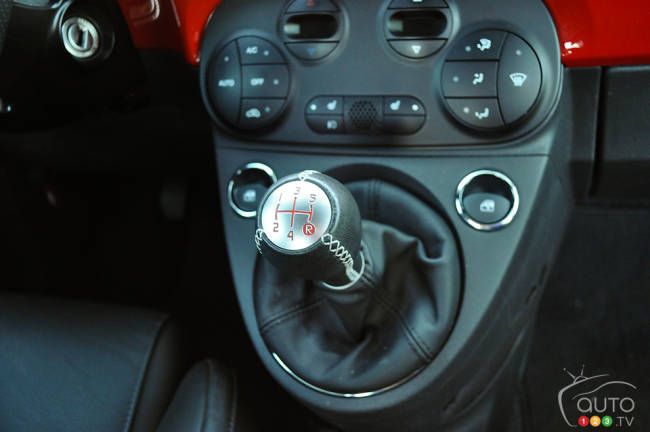 Out on the open road, the 2013 Fiat 500 Turbo offers reasonable handling. While the steering is definitely not as sharp as a MINI Cooper's, it still allows fun times behind the wheel. Compared with the British benchmark, the suspension is also softer for a more comfortable ride, yet it makes sure not to take all the thrill and feedback out of the driving experience.

The 2013 Fiat 500 Turbo handles like a taut city car, one that feels safe and stable thanks to competent 4-wheel disc brakes. On the flip side, the high beltline in the back limits visibility and thus affects parking manoeuvres.

Almost everything about the 2013 Fiat 500 Turbo feels small and tight. One notable exception, however, is the meaty shift knob that naturally falls into hand. What's more, soundproofing is nowhere near luxury sedan levels. When cruising at 115 km/h with the engine revving at 3,000 rpm, the interior is fairly noisy.

Regardless, the 2013 Fiat 500 Turbo has a certain je ne sais quoi that always seems to put you in a good mood. 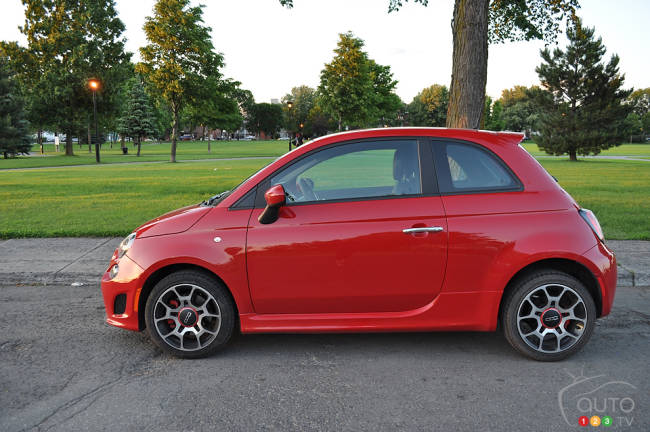 The 2013 Fiat 500 Turbo handles like a taut city car, one that feels safe and stable thanks to competent 4-wheel disc brakes. (Photo: Marie-Laurence Paquin)

Inside and out of the Fiat 500 Turbo

Round is the theme for the 2013 Fiat 500 Turbo, whose distinctive headlights and chrome-clad "500" logos add a bit of extravagance to our landscape -- and I'm thankful for that! Like I said earlier, this car essentially looks like a toy (but of course you know better after sampling its delightful performance).

Inside, the dashboard requires some getting used to. It may look very modern and colourful, but the minimalist layout forces you to navigate through a bunch of sub-menus. The singular juxtaposition of the speedometer and tachometer will also make some people frown.

While certain controls are excessively large, others are just too darn small. For instance, I wasted lots of precious minutes searching for the trip meter reset button, which happens to be located at the tip of the turn signal stalk.

Storage is limited and the rear seats are cramped, albeit decently comfortable. Those who sat behind me and my 5'1'' frame luckily enjoyed a little more breathing room!

Finally, I question some of the gadgets, like the small recess for the GPS mount, but overall, the 2013 Fiat 500 Turbo's exterior and interior positively stand out from the often dark and lifeless competition. 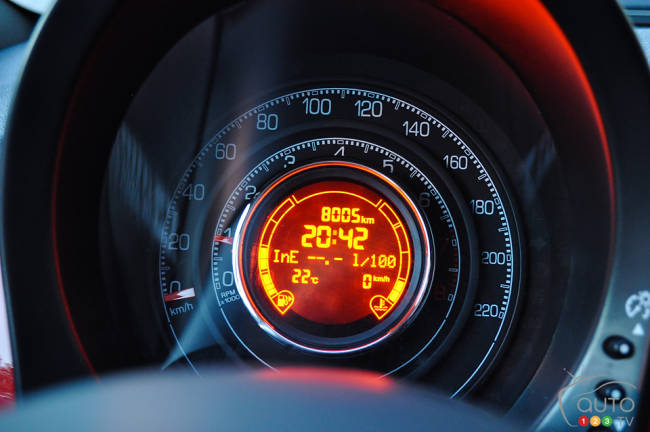 The singular juxtaposition of the speedometer and tachometer will also make some people frown. (Photo: Marie-Laurence Paquin)

Speaking of which, one could say that the 2013 Fiat 500 Turbo stands alone on the fence that separates A- and B-segment cars. It delivers the performance of a MINI Cooper in a package the size and price of a Scion iQ. Ultimately, I believe its Italian charms and great value are tough to beat.